In the time before postcards, soldiers who wanted to send a token to their loved ones at home had to get creative. Soldiers in the Boer War would tear off a piece of their uniform and send it with the message ‘torn from my coat I send to thee, this war worn piece of old khaki’.

Archivist Jennifer Jerome discovered this lovingly decorated scrap of cloth from an army uniform in a box of anonymous donations, and set about finding out its story.

Torn from my coat I’m sending to thee

With luck and love from one alone

To thee “My Love” and the “Dear old Home”

Who was Trooper K Ward, and what was his relationship to Miss E Taylor?

As it turns out, John Kenneth (Kenny) Ward Kenny Ward (1875-1925) is not too hard to find. Kenny’s first career was as a butcher. However, he gained local fame as a comedic performer. He appeared regularly in several Tasmanian papers, which record Kenny performing at events such as the ‘Butchers variety concert’, Democratic League Smoke Socials, and local fundraising events. An account in the Mercury of February 1898 remarks “Kenny Ward as a comic singer, won unbounded applause, and three encores”. 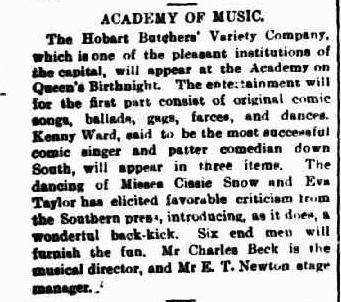 It was in one of these concerts that young Kenny appears to have developed a fondness for Eva Taylor (the dancing girl with the impressive back-kick). The two were billed together on a number of occasions, but the friendship did not progress to any lasting romance. After returning from a second tour in South Africa in 1902, Kenny married Ambrozine (Ida) Smith on 15th of March 1905 at Trinity Church Hobart.

Kenny left Hobart in April 1900 with the 1st Tasmanian Imperial Bushmen in the troopship Manhattan to serve in the Boer War. He returned in 1901, but immediately re-enlisted in the 2nd Commonwealth Contingent. In the ‘Jamieson Raid’ Kenny was said to have been instrumental in the capture of a Maxim gun from the Boers. At the soldiers’ request, the Maxim gun was placed at the ‘Hobart Museum’. However, the Tasmanian Museum and Art Gallery has not been able to find records of the gun in their collection.

Kenny’s other passion was horses. He was a horse owner and rider with the Hobart Trotting Club, where he won the 1st class 1.5 mile race on his horse ‘Highlander’ in April 1908. However, he is also noted as ‘running into a post’ with his horse Oakwood’ in a 1909 race. Below you can see an example of the Hobart trotting scene in a video from the Hobart Show, 1951.

In the early 1900s Kenny turned his talents to the art of barkeeping, as the licensee of the Argyle Hotel (1910) and the Caledonian Inn (1916). Like many men of his generation, when the Great War broke out Kenny was still of an age to take part. Was it only a sense of duty that prompted him to re-enlist? Or was this spirited larrikin hoping to relive the glory and camaraderie he experienced while fighting in his youth? In 1916, at the age of 41, Kenny signed up to join the 40th Battalion in WWI, leaving Ida to run the inn.

Kenny moved back and forth between the ranks and positions as Acting Corporal or Sergeant. During one stint as Acting Sergeant Kenny was admonished for being absent without leave. He was severely injured during this period of service. While in France he sustained gunshot wounds to the face, head and left arm. He was medically discharged in June 1918, as a Lance Corporal.

After the war Kenny continued to work with race horses and in 1925 he was listed as working as a ‘government messenger’.

The journey that this piece of cloth took to reach our archives is still a mystery. Torn carefully from a coat, it accrued special significance as it was carefully decorated by Kenny, or one of his troop. We don’t know for sure that it was ever sent to Miss Taylor, but the message of love, imbued with the memories of a war and embellished with the pride of an empire, has kept this little scrap from being discarded.

Another example of a decorated swatch of khaki sent from the Boer war can be found at the Australian War Memorial.

A photograph of Kenny can be found in John Bufton’s 1905 publication Tasmanians in the Transvaal War.

More about Tasmania’s involvement in the Boer War:

Robertson, Jill, Not for self but empire : the story of a Bellerive soldier in the Boer War 1899-1902 : Frank Edward Morrisby, (Bellerive, Tas : Bellerive Historical Society, 1994)

Sargent, John R, For Queen and country : the cementing of the Empire : a tribute to Tasmanian contributions to the Boer War, 1899-1902, including the Bellerive connection (Bellerive, Tas. : J. Sargent, 1999.)

Jessica is an archivist for the State Library and Archive Service. View all posts by Jess Walters

1 thought on “This war worn piece of old khaki”

All Aboard! Who remembers the train cake from the

“The natural world is in serious trouble and it

Our snow-laden mountain from the ‘birdcage’ at

Earlier this year, we asked you to nominate your f

New blog!  How did the clean up of old railway re

The @tasarchivesandheritage blog has a brand new p

Recently digitised and added to our online archive

A historic Hobart landmark, the Brunswick Hotel, b

“So I take this word reconciliation and I use it

Have you seen these prisoners staring down at you

To celebrate our cultural collections at the Allpo

It’s World Bicycle Day! According to the United

Today is National Public Education Day and we reco

Would you like to be part of our community led exh

Would you like to be part of our community led exh