In the 1930’s, in the aftermath of the Great Depression, Tasmanian educators came up with a bold new vision to transform rural schools. They wanted to teach the latest in agricultural science, to instil a lifelong love of learning, and to help Tasmanian rural children develop into informed citizens of a modern democracy. They ended up creating a model that was admired around Australia and the world: the Tasmanian Area School.

END_OF_DOCUMENT_TOKEN_TO_BE_REPLACED 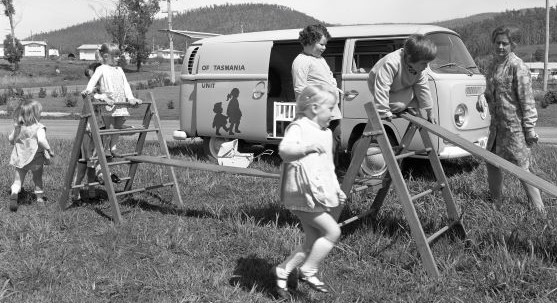 Firstly, a confession. I have struggled to write this blog, to gather references and to find a quiet space to write an intelligent, interesting, engaging and informative piece on the history of early childhood education in Tasmania. My first effort was informative, but it seemed to lack something, and I wasn’t happy with it.

Then, one day, I had an epiphany while walking after work. I feel an immense pride in the public education system in Tasmania. I send both my boys to public schools on the Eastern Shore in Southern Tasmania. My father was a well-loved, enthusiastic and dedicated Physics and Maths teacher in both public and private schools in Northern Tasmania. I still recall him enthusiastically telling me, “Tasmania has the best public education system in Australia.” When I studied at University, I was constantly meeting his past students whose choices were in some way inspired by his teaching methods.

This is how education began in Tasmania – with inspired, talented people dedicated to improving the lives of Tasmanian children.

While researching this blog, I discovered one such person, Joseph Benson Mather, who was determined to provide an education to Tasmania’s poorest children. I and my colleagues went on to find dozens of stories of devoted parents, dedicated teachers, and generous communities who believed that young Tasmanian children deserved high quality early childhood education. Together, they laid the groundwork for early childhood education in Tasmania today, where amazing teachers encourage little children to learn through play, to be curious, and to love school.

END_OF_DOCUMENT_TOKEN_TO_BE_REPLACED

We can only imagine what it must have been like to be the first teacher in Tasmania. Jane Noel was a Sydney schoolmistress who began a private school in a hut in a lane off the lower end of Collins Street in Hobart Town in 1806. What follows is a brief look at the lives of three of Jane’s successors between 1868 and 1945.  It is also a research journey, investigating the sometimes dark nooks and crannies of the collections of the Tasmanian State Library and Archives.  What you think you will find on these journeys is sometimes very different than what you begin looking for, but it is always illuminating.

END_OF_DOCUMENT_TOKEN_TO_BE_REPLACED

Schools with no toilets and no sinks to wash your hands. Sick children labelled as “mentally deficient” because of their swollen adenoids and tonsils. Adolescents with a full set of dentures, little children cleaning their teeth with the corner of a sooty towel. A generation of teenagers with curved spines and poor eyesight from bending over their school desks in poorly lit and freezing cold classrooms. This was the picture of public health in Tasmanian schools in 1906. Over the next 75 years, schools found themselves on the front lines of the battle against contagious disease, poor nutrition and poor health. Over time, Tasmanian public schools became a crucial part of the Tasmanian public health system, and transformed the lives of thousands of Tasmanian children. Read on to find out more about this fascinating story.

END_OF_DOCUMENT_TOKEN_TO_BE_REPLACED

What would you have learned at a Tasmanian public school in 1869? Mostly, just reading, writing and arithmetic, from a teacher not much older than yourself, in a class of 40-60 students, and in a textbook that your grandfather might have read in Ireland thirty years earlier. The texts might have been boring and out of date, but the reasons why are fascinating. That’s because the public school curriculum in 1869 was deliberately designed to be bland and uninteresting, in order to avoid social conflict. What follows is the story of a journey – from the idea that education needed to reform and contain children, to the radical idea that children in public schools should be inspired to learn, and to become curious and informed citizens. Read on to discover more!

For an audio introduction to this story, check out our interview with ABC Radio!

END_OF_DOCUMENT_TOKEN_TO_BE_REPLACED

This year marks the 150th anniversary of public education in Tasmania.

To help us understand where we’ve come from (and perhaps where we’re going!) the librarians and archivists of the State Library and Archive Service are producing a series of blogs on the history of public education in Tasmania. These aren’t comprehensive – rather, they’re snapshots of places, people, and institutions, as well as a guide to the resources we hold at the State Library. Some of the common themes that feature throughout the blogs are concerns about the curriculum; about health, physical fitness, and nutrition; about sanitation; about industrial training and academic outcomes. But these blogs are also something more – they’re about the history of childhood in Tasmania, and how our view of children – and what education means – has changed since the nineteenth century. We hope you enjoy the journey!

The Orphan Schools established in Hobart in 1828 were an early form of public education, but a harsh one. Their aim was to transform poor children into ‘respectable’ industrious adults. The system was cruel even by the standards of the day – based on discipline, religion, punishment and control. Most of the children were not true orphans, but the children of convict parents, whose imprisonment and work for the convict system prevented the parents from caring for them. Others were the children of the unemployed, destitute, or those that the authorities perceived to be leading immoral lives. Some Aboriginal children were institutionalised as well. All were separated from their parents, housed in cold rooms with no fires and poor sanitation; disease was rampant and mortality was high.

What follows is not easy reading, and it is not suitable material for young children. The story is characterized by cruelty, abuse, and neglect, but also by tremendous resilience, resistance, and compassion. The historical records in the Tasmanian Archives tell this story – and throughout this blog, we will link to them. You, the reader and researcher, can choose to follow the story further in as much in depth as you choose to.